Teaching FileMaker to Send Alerts to an iPhone 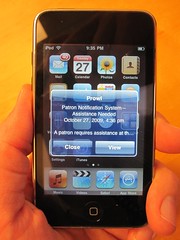 Recently I had the need to send alerts to my iPhone from my FileMaker system.  I started using Twitter, and while that works ok, the alerts would get lost in my twitter stream. I needed something that would make different sounds based on what kind of alert was coming in. I found a super simple solution. And it was almost free!

First I discovered Prowl, a Growl client for the iPhone.  Prowl allows you to send Push Notifcations to your iPhone. Prowl can send 5 different levels of alerts, just like the Growl Desktop apps. You can set your Prowl app to play different sounds based on the level alert! Perfect! Then, following a link on Prowls website I discovered a Groovy class for sending Alerts to Prowl from neilspeter. And since my favorite FileMaker plug-in, ScriptMaster, speaks Groovy I was on my way.  I created a ScriptMaster module that installs a new External Function called “prowlSend” the full function call looks like this:

All you need is a single script step to send the Alert!  This makes it super simple to send  Push Notifications to my  iPhone. Since ScriptMaster runs on FileMaker Server as well, I can even have Server Side scripts sending Push Notifications to my iPhone.  I love this becuase now I have scripts that run throughout the day checking on the state of my System and alerting me if anything warrents my attention.  I can set the level of alert so that my iPhone only vibrates if the alert is not critical, or If something requires my immediate attention, my iPhone will scream like a banshee until I deal with the situation.

If you want to try it out You will need the ScriptMaster plugin from 360works. It is free and is installed automatically by the demo file.  You will also need the Prowl iphone app, which costs three whole dollars. Once you create your account at Prowls website, your API Key will be available on the settings page. The Demo file installs ScriptMaster, installs the Prowl functions, and shows you exactly how to send alerts.  If you want to use it in your own solution, just import the Startup Script, and the Scripts in the ScriptMaster Folder into your own solution and make sure that they are executed on startup, just like in the demo file.

Apologies, the demo file has gone missing.
Talk to us